The page is on painted kid skin, set down and applied on a shaped table. An original wood frame with golden buds, in the round worked , exalts its outline. The scene represents an episode linked to the mythic  Hercules. The story is the harbinger of the death of the hero. Hercules, with her wife Deianira, was going to Trachine and because he had to ford the river Eveno, he had accepted the offering of the centaur Nesso to take on his back Deianira. Once Hercules founded out that Nesso wanted to escape with her, he shooted an empoisoned arrow he had dipped in the blood of Idra of Lerna. Nesso, before his death, wanted to prepare a terrible revenge: he whispered to Deianira to keep off, once dead, the shirt , to dip it in the blood of his wounds and to conserve it as talisman. If, someday, her husband didn’t love her anymore, she would have made her husband wear it to guarantee his fidelity. The described moment on the page of the fan is really this one. When Hercules fell in love with Jole, Deianira sent to him through the slave Lica the shirt dipped in the blood of Nesso, ignoring the real danger. The hero once wore the shirt, he preferred the pile to a slow death amongst terrible pains. The painter has kept in a very realistic way, the moment of the Nesso’s wounding, underlining the solemnity and the dramatic moment. The figure of the fluvial divinity, of Hercules, of Deianira and of the Centaur emerge on the front of the scene, the light exalts the faces, the postures, the natural signs which reveal real and deep feelings and emotions. The body of the Centaur Nesso, tragically alone and almost dead, is on a first plane, on the right, balancing the whole scene. The construction of the landscape where the presence of water emerges, the intensity of the sky’s color are even elements which show the great quality of the painting, all this allowed the attribution to Domenichino (Domenico Zampieri, Bologna 1581 - Napoli 1641). 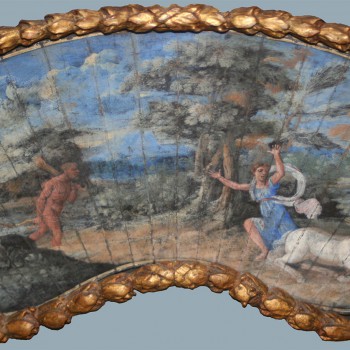 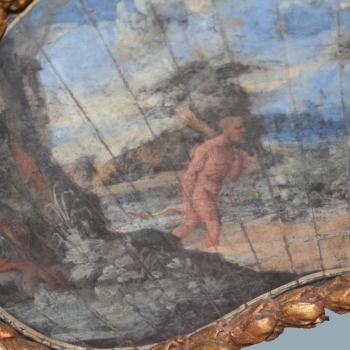 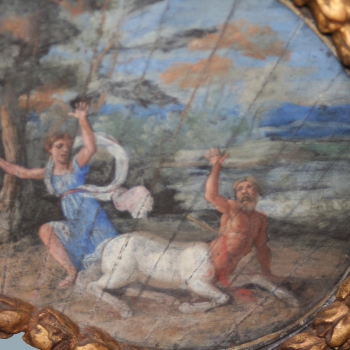 "Details make perfection, and perfection is not a detail." Leonardo Da Vinci
© I Miei Ventagli - Privacy
Sito Ecommerce by Pianetaitalia.com